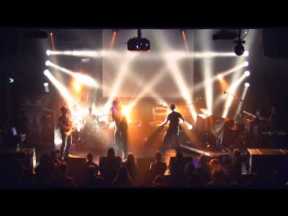 I’m not sure how, but luckily, one day I stumbled on this incredible band, Dosa Jhana. It’s rare to find a band in the extreme metal genre that even talk about Buddhism, never mind dedicating their whole effort to the path. The only other metal band I know that has any Buddhist overtones would be The Firstborn, who are amazing themselves.

I ended up getting a copy of their demo and was blown away at the array of sounds they included in the music. It wasn’t just extreme metal, there are various elements an.d layers to the music. I knew I had to profile the guys here on PM, and below please find the interview I did with Steven form the band. I hope you enjoy it and hope you’ll give their music a listen. Here’s a YouTube video of their’s to get you started.

Dosa Jhana is a rather obscure band to most, so why don’t you tell us a little bit about the band.

Dosa Jhana is a Buddhist-metal band from the Amsterdam area in the Netherlands. We are basically a two piece band but recently we added two extra musicians (Dave Wismeijer of Isfere on bass and Melle Kramer of Obsidian on drums) to perform our music live. We have played on several art exhibitions as well as regular concert venues, most notably being the opening act for fusion-metal greats: Cynic.

Dosa Jhana was founded in 2006 in the mind of British artist Maria Pask. She was asked to participate in the Sculpture Projects ‘07 in Muster Germany, where she presented her work ‘Beautiful City’. As a part of this work there would be series of performances or lectures on religion in the modern day by different religious groups.

Maria used to be my teacher in Art school, but we have kept in touch after I graduated. She knew I was into metal music and she approached me if I would be interested in performing in Muster as a Buddhist metal band. My direct response was “Sure, that sounds like the kind of thing I would do anyway!”. I have always had a sympathy for Buddhism, but it wasn’t until that point that I read more into it. I invited my good friend and partner-in-crime David Hazeleger to join me since he is a musical genius, shares my taste in music and is one of the most zenned-out guys I know. Things have led from one thing to anthother since then I guess…