The Dalai Lama intends to retire as head of the Tibetan government in exile next year as he looks to reduce his ceremonial role and scale back his workload, his spokesman told AFP Tuesday.
The Tibetan movement in exile, based in the northern Indian hill station of Dharamshala since 1960, directly elected a political leader in 2001 for the first time.

“Since then, His Holiness has always said he has been in a semi-retired state,” spokesman Tenzin Taklha said.

“In recent months, His Holiness has been considering approaching the Tibetan parliament in exile to discuss his eventual retirement.”

Taklha stressed that his “retirement” would be from his ceremonial responsibilities as head of the government, such as signing resolutions, not his role as spiritual leader and figurehead for Tibetans.

END_OF_DOCUMENT_TOKEN_TO_BE_REPLACED

Thousands or hundreds of Tibetan students have taken to the streets in protest this week, depending on divergent accounts — one from advocates for a free Tibet and another from the ruling Chinese government.

The students say their culture is being wiped out as China overhauls curriculum and limits the use of the Tibetan language in schools.
“The protest resulted from a new education policy which reduces Tibetan language teachings,” an official identified only as Mr. Wang, speaking for the International Information Office of the Qinghai government, said Thursday.

END_OF_DOCUMENT_TOKEN_TO_BE_REPLACED

A couple of days ago, I dropped into a local Tibetan shop and started talking with one of the owners. Whenever I get the chance to, I love to ask ethnic shop owners about their background and how they ended up here. This being a Tibetan shop I was curious, of course, about her roots to Tibet and what her journey had been like.

She was 9 years old when she left Tibet, her family fleeing via the Nangpa La Pass. She didn’t go into great detail, but as we can all imagine from stories we’ve already heard, it was not easy. Her family made it safely to Nepal, and from there she was schooled in Nepal as well as in India.

END_OF_DOCUMENT_TOKEN_TO_BE_REPLACED

From The Office of His Holiness The 14th Dalai Lama

I would like to offer my heart-felt congratulations to Mr. Liu Xiaobo for being awarded this year’s Nobel Peace Prize.

Awarding the Peace Prize to him is the international community’s recognition of the increasing voices among the Chinese people in pushing China towards political, legal and constitutional reforms.

I have been personally moved as well as encouraged by the efforts of hundreds of Chinese intellectuals and concerned citizens, including Mr. Liu Xiaobo in signing the Charter 08, which calls for democracy and freedom in China. I expressed my admiration in a public statement on 12 December 2008, two days after it was released and while I was on a visit to Poland. I believe in the years ahead, future generations of Chinese will be able to enjoy the fruits of the efforts that the current Chinese citizens are making towards responsible governance.

I believe that Chinese Premier Wen Jiabao’s recent comments on freedom of speech being indispensable for any country and people’s wish for democracy and freedom being irresistible are a reflection of the growing yearning for a more open China. Such reforms can only lead to a harmonious, stable and prosperous China, which can contribute greatly to a more peaceful world.

I would like to take this opportunity to renew my call to the government of China to release Mr. Liu Xiaobo and other prisoners of conscience who have been imprisoned for exercising their freedom of expression.

Absolutely amazing. It’s good to see someone standing up to China. Yes, they will be outraged, not sure if that’s a strong enough word, but awarding this to Xiaobo is a message to China that it really needs to get i’s head out of it’s rump and clean itself up!

via The Associated Press.

Imprisoned Chinese dissident Liu Xiaobo won the 2010 Nobel Peace Prize on Friday for “his long and non-violent struggle for fundamental human rights in China” – a prize likely to enrage the Chinese government, which warned the Nobel committee not to honor him.

The Norwegian Nobel Committee chairman Thorbjoern Jagland said Liu Xiaobo was a symbol for the fight for human rights in China.

“China has become a big power in economic terms as well as political terms, and it is normal that big powers should be under criticism,” Jagland said.

It was the first Nobel for the Chinese dissident community since it resurfaced after the country’s communist leadership launched economic, but not political reforms three decades ago. The win could jolt a current debate among the leadership and the elite over whether China should begin democratic reforms and if so how quickly.

END_OF_DOCUMENT_TOKEN_TO_BE_REPLACED 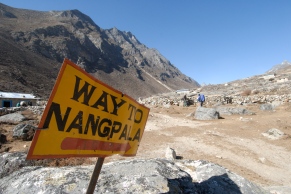 4 years ago today, one of the most important yet unfortunate events took place. Like many days before and after September 30th, 2006, a group of 75 Tibetans were attempting to flee the iron fist of China and reach the refuge of Nepal, via the Nangpa La Pass through the Himalayan mountains.

The trip had already been  harrowing enough. From the truck packed with people, resembling sardines in a can, to the harsh travel through the mountains, to the twine holding one’s shoe sole to the rest of the shoe to keep their feet warm, it soon became a test of survival rather than a simple escape to freedom.

Morning had just broken, and the group was on the move, hoping that the journey would soon come to an end. It was not the case, and frostbitten toes were the last of their worries. From the peaks they saw shadows scrambling and then the loud popping noises were heard, as was the sound of bullets buzzing by.

END_OF_DOCUMENT_TOKEN_TO_BE_REPLACED

Press release below cut and pasted from an e-mail message announcing the event.

We’re excited to kick-off Art for Tibet II with an online auction and art preview beginning at 12pm (EST) today! Standing in solidarity with the Tibetan freedom struggle and persecuted artists, writers, and intellectuals in Tibet, more than 100 acclaimed international artists will be exhibiting works at this incredible event.

END_OF_DOCUMENT_TOKEN_TO_BE_REPLACED

“We all felt that we had to get our people out of there as soon as we could because this could get uglier,” said one expedition leader. “The feeling was that we were being watched, and now that people were talking about it in base camp, it was very uncomfortable”

We’ve all seen the video by now of the CCP straight up shooting at a line of Tibetans on the Nangpa La pass from Tibet to Nepal, if not click the links but be warned you will see people being shot to death.

“Murder In The High Himalaya” is the story of that cold, dark day in the mountains of Tibet. Not only from the perspective of the Tibetans who managed to escape, but from the climbing expeditions climbing the Himalayas that day.

END_OF_DOCUMENT_TOKEN_TO_BE_REPLACED

Ed. Note: Spiked.com is running a series this week, from Tibet. I have not been a fan of some of the condescending articles that have been written so far, but I thought in this particular article the writer made some valuable points. His “know-it-all” voice gets in the way a bit now and again, but for the most part I think this article is important to read and pick apart.

From Spiked.com series inside Tibet
It’s not often I feel the urge to defend the Dalai Lama, having never been a fan of his vogue spiritualism or a supporter of the idea that he’s the man to bring liberty to Tibet. But things change when I find myself in conversation with Tibet’s officials. Their belief that the ‘Dalai clique’, as they call it, is behind every problem in Tibet is so wrongheaded that it’s enough to make even a Dalai doubter like me rush to the giggling monk’s defence.